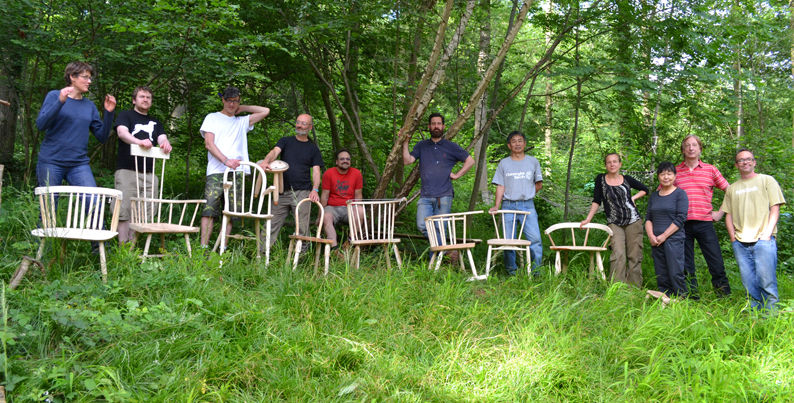 Following the high level of interest in the original Bodging Milano project, co-founders Rory Dodd and Chris Eckersley decided in 2012 that things could be moved forward by inviting a new group of designers to make the trip to Clissett Wood. So, from the 29th of June until the 5th of July, under the expert guidance of Gudrun Leitz and her team, a second group of designers went bodging.
The BM2 group is :
Clifford Leo Harris, Jon Harrison, Koji Katsuragi, Liam Hopkins, Sarah Kay, Simon Maidment, Stefano Santilli, Valentina Gonzales Wohlers.

We'd had such a positive response to the original project and it seemed possible that we might spoil what we had by trying to repeat it. But, having seen the work of the Japanese chair-maker Koji Katsuragi, I took a chance and sent him an email inviting him to come over. 'Thankyou very much', he replied, 'I can see no reason not to come!' A few days later he and his wife had already booked their flight, and so Bodging Milano 2 was on the road. Fired up with enthusiasm, Rory and I put the rest of the group together from a sort of wish-list of people whose work we admired, and ended up with a team to rival the original. - Chris Eckersley

The following photos record the event. The colour photos at the end show a factory visit by Koji and his wife to Dave Green's company Sitting Firm Chairmakers. The final three photos show Koji's workshop in Japan. Sitting Firm is going to be producing Koji's chair under licence for the UK market.